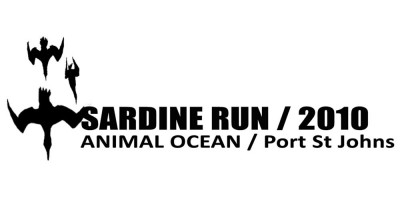 Every year on the South African coast between the months of May and August, shoals of sardines (Sardinops Sagax) travel north from the Agulhas banks off Cape Town. They swim along the coastline as they make their way up along Transkei and KwaZulu-Natal.

The Sardine Run is a multi faceted spectacle of predators and prey. It is a marine wildlife extravaganza rivaling the Great Migration of the wildebeest. Dolphins, sharks, whales and birds gorge themselves on the sardines allowing the diver to witness first hand a show that will live on in memory for ever. 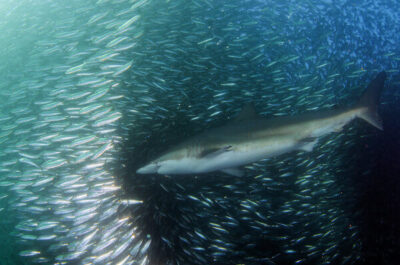 A friend, Jean Tresfon, had been enthusiastically discussing putting an expedition together to go and experience the sardine run from Port st Johns. We wanted a small, like minded team, so we could quickly mobilize in the mornings and have minimal impact on the animal’s behavior in the water. It didn’t take long for us to find six eager divers; we booked a wonderful lodge, packed the cars and hit the road.

This was to be my 3rd Sardine run, but the first one under my own name, ANIMAL OCEAN. I was filled with excitement thinking back to the sights I have been blessed enough to see and the though that I would be there again. A hint of apprehension lingered with me as I knew that there are no guarantees for this trip. 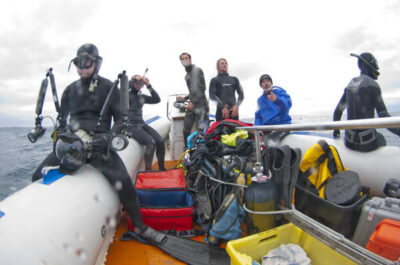 So many elements have to come together for divers to have a successful trip.

By this I mean that the boats have to be able to launch through the surf zone, the visibility has to be good enough to see and divers have to enter quickly without disturbing the animals. The sardines have to enter the area where we are based and the predators have to find the fish and then form the balls

If all these things happen then you stand a chance of experiencing this madness. Luckily the team knew all this and were prepared for anything. With this attitude you will have a great time. 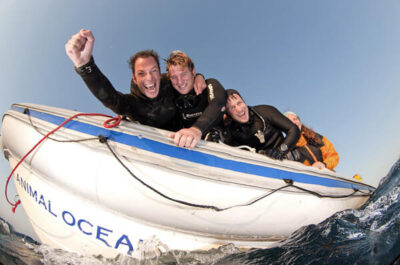 We ended up spending our week with great ocean conditions and lots of action. We only had 1 day where the ocean was quite. This is however a relative term because we still had many dolphins, gannets and whales with us but they weren’t feeding.

We got to experience many different kinds of bait balls, including one morning were we dived on a ball of baitfish being devoured by sharks and Eastern little tuna. In the image you can see hundreds of little tuna as they shot in to feed. They ate every single last bait fish. 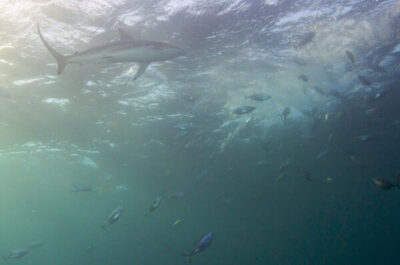 We found bait balls comprising of shad (Pomatomus saltatrix), mackerel and red eyes (Etrumeus whiteheadi), each behaving differently as a whole. Some such as red eye form loose fast moving shoals that can be hard to follow while shad form shoals that actively seek protection amongst the divers. 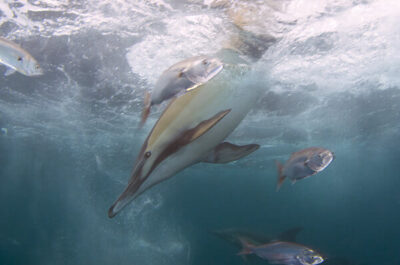 Other highlights were seeing so many humpback whales travelling up the coast line towards their calving grounds to the north. It is always a privilege to hear the sound of a pod of whales breathing as they surface or watch as they breach in the distance 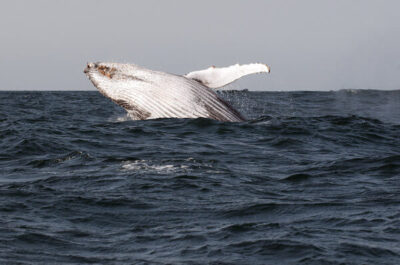 I have tried to describe two of the days that really stand out to me, but Im afraid words fail me. I can only hope to fill in your minds eye with the amazing images that Jean Tresfon captured on his trip with me.

The day didn’t look good and by 10am we had failed to spot any early morning action. The wind was blowing strong from the North East and the sea had whipped itself into a mess of whitecaps and choppy swells. I had received a call that there was potential action “10km” of shore. I knew that the boat didn’t have a GPS and I couldn’t be certain if 10km was actually 5 or 15 km. We searched unsuccessfully none the less and slowly headed back towards Port St Johns. Luckily we spotted action off the river mouth and we jumped in. Jean was first on this small bait ball and had the pick of the shark action. He took this image as one came careening at him. 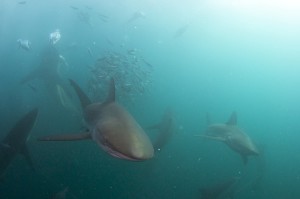 Another boat arrived and told me about the great baitball they had just come from and where to find it. We beat into the wind and found what everyone was speaking about. As I arrived I saw one of the skippers flailing around in his swimming shorts squealing with glee as a Byrde’s whale surged through a black mass just under the surface. Snorkelers were washing off its back as the head and body broke the surface.

In a heartbeat we were in the water with the swirling mass of sardines. The ball was roughly 10m wide and 6m deep and just being hammered buy a pod of common dolphins, countless dusky, blacktip and copper sharks. And there was a Brydes whale sporadically lunging though. All the animals were unperturbed by the many divers bobbing in the water. The team set them selves up around the action and got to witness first hand the splendor of so many predators feeding on this writhing shinning mass of fish.

We launched as usual into a beautiful day and headed north. I though it would be best to check the area of yesterdays amazing action, if there was nothing then “oh well”, we’ll search elsewhere. There were quite a few boats in the area as the operators form Mboyti had heard about the previous days baitball. 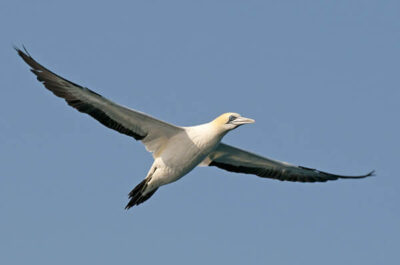 I spotted a small pocket of bird diving not far off and headed towards it, I could see another boat rapidly approaching. They arrived just before I did,  I cruised up and we chatted. After waiting 20mins we jumped in and enjoyed this delightful little ball all to ourselves. The action consisted of only a handful of dolphins but I knew that we had sardines and that no one else would bother with such a small ball after the behemoth of a sardine baitball of the previous day.

Boats came and went, even with me inviting them to dive.

After hours of sitting on this one baitball the team was relaxed and happily soaking in the slow but steady dolphin action. I even put the boat on top of the fish so the team could get split screen images of the boat and the fish. 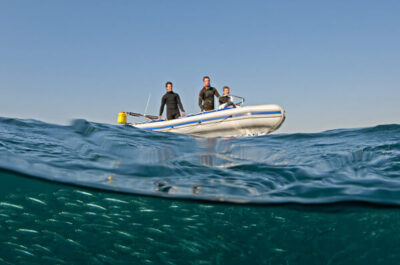 It all changed at 2 pm (after 6 hours of us diving). It was as if all the predators in the area got hungry and realised that there was a single shoal of sardines to feast on. The sky filled with gannets, the sharks welled up from below and the handful of dolphins were joined by others. The feast had begun. 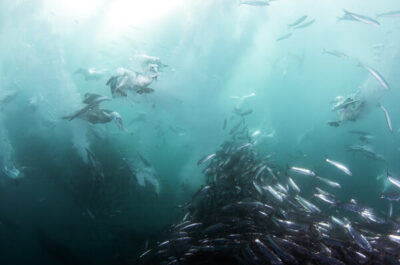 The photographers were scratching for memory cards, sucking the dregs of their cylinders and swapping batteries. After an entire day of action the best had only just started. We stayed with this now intense action until the gannet’s glowed orange in the light of the setting sun. The divers came up shrieking with joy. Mark van Coller was ecstatic with the evening light and wore a smile that was larger than his head. We headed in tired and extremely happy. What a way to spend a day. 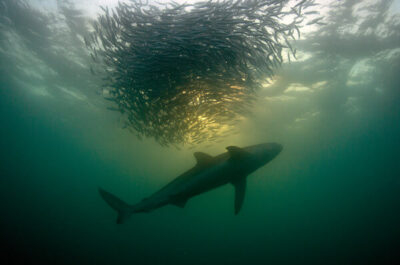 I hope this sheds some light on the sardine run and our experiences this year, please feel free to post your comments.

I will be heading to Port St John in June – July 2011, if you would like to join me. Please email me and we can plan another amazing adventure.