The playful Cape Fur seal in Cape Town have been making the news locally and abroad. A recent image made it into the Telegraphs “picture of the day“.

The seal eyeballs me. She’s gliding slowly through the water beneath me, her huge, wide-open eyes fixed intently on mine. For a moment she pauses, hangs motionless in the water. Then, in a sudden flurry of movement, she twirls towards me – her body a whiskered torpedo – and inches from my face, opens her mouth to blast me with a cloud of bubbles. 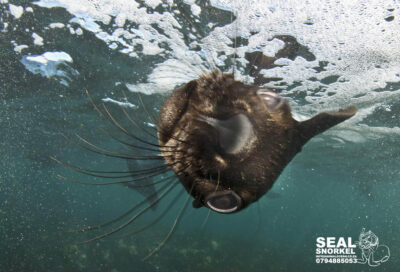 Prank performed, she darts off again, disappearing into a thicket of kelp. I’m left floundering in an effervescent haze, laughing and snorting through my snorkel.

He’s brought us out here in his eight-metre rubber duck to snorkel with the seals in the waters around Duiker Island, just a 10-minute boat ride from Hout Bay harbour. Depending on the season, this cluster of boulders can be home to up to 5 000 Cape fur seals. It’s a hefty number, and it makes for a lot of jostling and shoving between the blubbery bodies carpeting the sun-baked rock.

Steve has anchored the boat just a few metres off Duiker Island. As we zip up our wetsuits and pull on our masks, we marvel at the sun-flecked ocean, deserted coastline and towering mountains surrounding us.

The Cape fur seal is commonly found off the coasts of South Africa and Namibia. They’re different to the northern hemisphere’s Arctic-dwelling seals. For one, Cape fur seals are powered by a strong upper body, whereas most other species of seals get their oomph from their tails. Cape fur seals also have ears. These, along with their imploring, puppy-dog eyes and thick whiskers, make them disarmingly cute.

“Seals aren’t good on land,” Benjamin says tactfully, “which is why they’re often found on islands like these or desert coastlines free of predators.”

Looking at the seals on Duiker Island, it’s clear what Benjamin is getting at. They’re clumsy, awkward and oafish; lazily arf-ing at one another before flopping down unceremoniously in the next available sunny spot.

Luckily, while they may be useless on terra firma, nature has a magical formula for transforming these inelegant goons into utterly beguiling, graceful beings: just add water. 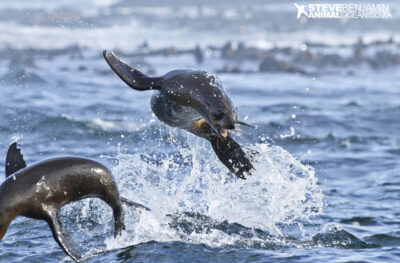 From the moment I hop overboard, I am captivated by life below the surface. Underwater, the world is an alien and mesmerising place. It’s here that seals are in their element.

Their streamlined bodies twist and turn in fluid choreography, all speed and grace and power. They move through water like ocean sprites, delicate strands of pearlescent bubbles shimmering in their wake. Every playful spin and gleeful leap is an expression of their pure exuberance.

It would be enough just to bob on the surface and watch these agile creatures play. But owing to their naturally curious nature, snorkelling with seals is a surprisingly interactive experience. Though Benjamin sternly instructs us to respect the seals’ personal space and not try to touch them, I am struck by how welcoming the seals are.

Of course, we snorkellers are abysmal swimmers in comparison. We gawk in wonder at the antics of our new playmates, holding our breath and swimming down to the bottom to simply gaze up at their nimble silhouettes.

“Snorkelling with the seals is something almost anyone can do,” says Benjamin. “If you can swim, you can snorkel.” Sheltered from ocean swells and measuring 5m at its deepest, during the summer months the dive site is a safe spot even for novice snorkellers. The expertise and experience of Benjamin and his crew are an added comfort.

As we watch a pup with the scuba divers below, another youngster weaves through the legs of the snorkeller bobbing beside me, then shoots up to the surface to leap out of the water. 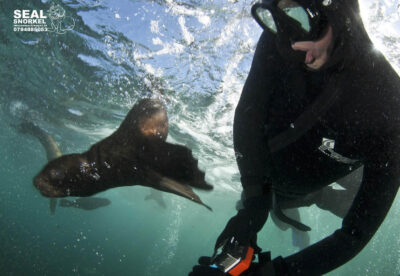 “Did you see that?!” the snorkeller asks, her face positively lit up. Eventually, it’s time to clamber back on to the boat and head home. Despite the cold that has seeped through our wetsuits, we are reluctant to leave the underwater playground.

On the way back to the harbour we pass a ferry full of tourists on a cruise around the island. Clearly not here to dive.

I’m happy I’m not on that boat. We may be dripping wet and only halfway to defrosting, but looking around at my fellow snorkellers, it’s obvious from the satisfied looks on our faces that we’ve been let in on something very special.

For more information or to book a seal snorkeling trip go to www.animalocean.co.za or call Steve Benjamin on 079 488 5053.