Shrieks of excitement, muffled through snorkels, drew my attention to a flurry of activity ahead of me in the water. A huddle of colourfully-clad snorkelers gazed goggle-eyed at the approaching fleet of broad, spotted backs … The sheer enormity of the sharks rising up to the surface gave the surreal impression that the coral reef itself had dislodged and was drifting lazily upwards from the seafloor to meet our group. We had come to Mafia Island, off the coast of Tanzania in East Africa, to find feeding whale sharks (Rhincodon typus) – and we had certainly succeeded! 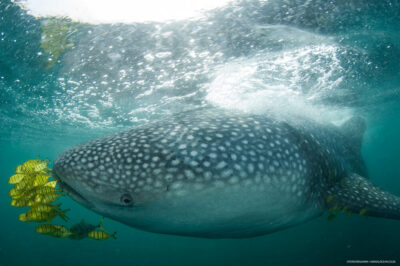 07h30 was a reasonably late start for Day 1 (in tropical terms, where the sun is up and blazing early enough to make lazing in clammy bedsheets a tad overrated). We took some necessary time to assemble our underwater photographic gear and then, preparation complete, our group of nine enthusiastic snorkelers and photographers strolled across the sand flats to meet our seafaring vessel for the week. “” was a locally-built dhow, complete with sail and 9.9 hp engine, and she provided ample space for our group and their cameras. From the comfort of her platform, we could hide from the sun to scan the glassy water surface for any sign of a spotty dorsal fin …Mama Mafia 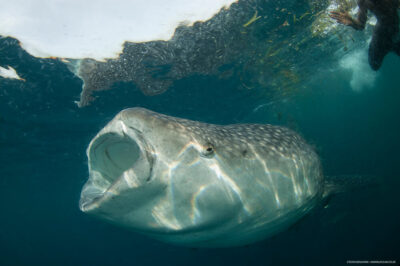 Eyes squinting, our gaze fixed to the Indian Ocean’s blue, we searched for an hour and relayed information from other boats at sea. It was freediver Pierre Frolla who spotted the first shark of the trip as it swam below us. The visibility was great and the colourful forms of starfish gleamed back up at us from the seafloor. Suddenly, we drifted into the middle of a loose feeding aggregation of three sharks! The shallow water made for interesting images as we could get the shark, its shadow and the surface in the same frame. Fueled by adrenaline, I put in a solid effort to stay with one particularly large shark as it slowly fed 5 m below me. After an hour of serious effort, my legs were burning and blisters developing in my fins, and I learnt that it wasn’t necessary to try keep up. The sharks continually circled the same wide area, and one just needed to wait for their return. A much simpler solution to! By 11 am, the wind had picked up and we returned to the Mama Mafia, raised sails and headed back to camp. 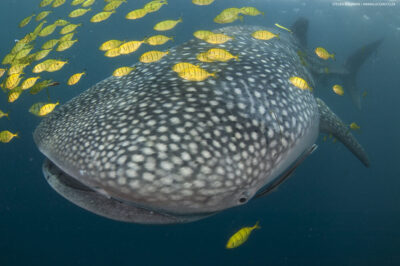 Day 2 saw us searching for sharks at 06h30, after a wonderful breakfast of mindazi, a sweet deep-fried ball of dough. It took us a long time to locate an area where the sharks were feeding. We dived in, eager to repeat the previous day’s experiences. About six sharks feeding in a small area greeted us, hoovering up plankton in the green-tinged water. At times it seemed as though we were swimming in plankton soup! The sharks circled tightly and swam open-mouthed among us. This lasted about four hours, and I eventually had to get out the water to take a break. When my camera battery died, I grabbed my GoPro and filmed for another hour. By 12h00, the wind picked up once again, the plankton descended and so did the sharks. We sailed back in, tired but happy with a fantastic day.

In the afternoon, on the high tide, thousands of jellyfish are brought into the mangrove forests, so Jean Trefson and I spent some time photographing them. The jellyfish are not poisonous and don’t sting, but it still feels strange swimming through a swirling mass of jellyfish! As it happens, it seems that jellyfish behave like all wildlife when you’re intent on taking their picture: just as you find a scene and the light is lyrical, the jellies pulse away or disappear all together. Typical! 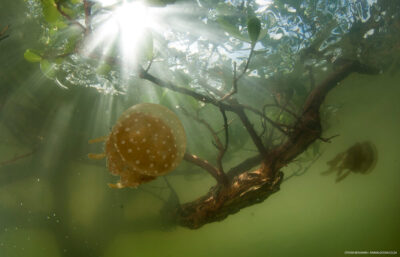 Day 3 greeted us with glassy ocean and we found the sharks on a pronounced current boundary line. This group was criss-crossing their way in and out of the dirty water (5 m visibility) on one side, and clean (20 m visibility) on the other. The water was filled with floating weed, flotsam and plankton. What I saw was as close to a whale shark baitball as I could imagine… The sharks were swimming side-by-side in a line, with thousands of fusilier fish ahead of them. Their mouths hung open as they broke the surface that shimmered with plankton, sending small fish leaping out of the way. Swimming ahead of each shark was a beautiful golden arc of kingfish. The action didn’t last very long but it was intense; at one stage I was sandwiched between three whale sharks 8 to 10 m in length, their mouths agape and me trying to get the best shot. 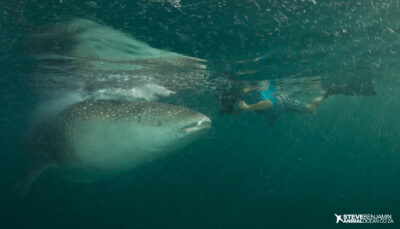 The group had high hopes on the final day of the whale shark phase of our expedition and two of the guests had flown in late, so they only had one day to experience the sharks. On a wildlife expedition that is normally not a good idea, but the day turned out to be one amazing encounter after the next. With flat seas and whale sharks feeding on the surface, we entered the water and swam with the sharks for an hour. When three other boats arrived with their flotilla of goggles and flippers, we went in search of more secluded sightings. Without much success, we re-joined the masses for another few hours with the sharks. With blisters on my toes and muscles burning from swimming hard for four days, I took out an inflatable stand up paddleboard (SUP) and tried a different way of experiencing the sharks. The sea was so flat that it was easy to paddle next to the feeding sharks, with an army of flapping snorkelers in tow! The day ended at around 13h00 when the sharks descended with the plankton and we headed back to camp. 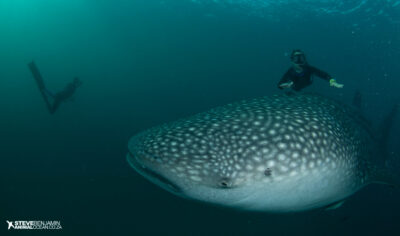 With the whale shark portion of the trip over, we headed to the southern side of Mafia Island and into the Marine Park to experience Chole Island and explore the coral reefs. Our home for the next three nights was the luxury eco-lodge of Chole Mjini. This lodge incorporates the natural vegetation and 12th century Arabic ruins on the island, and the design of each stilted unit has been thought through to the last detail. It really feels like a work of ecological architecture. The unit I stayed in was perched high in a giant baobab tree – with its trunk inside my room! My morning view from the king-sized bed, through the mosquito net, comprised baobab branches, mangrove forests and an endless ocean. Singing birds, buzzing cicadas and the ocean lapping the shore were my alarm clock. Dinners were served in a different location each night and ranged from the stone jetty, under the tamarin tree or in the Arabic ruin with tree roots draping the walls. 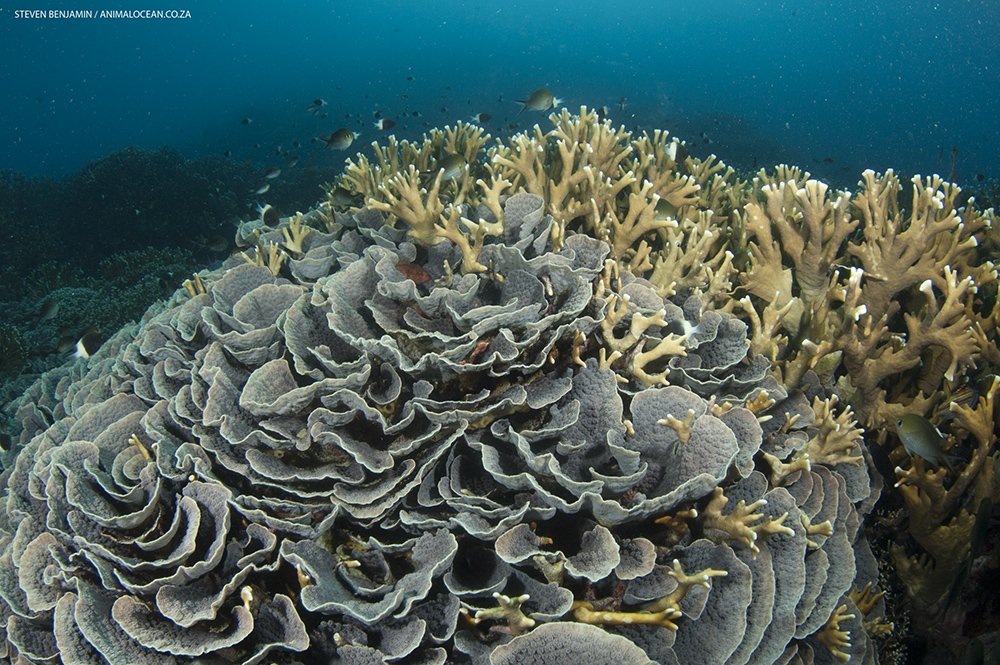 One would almost think that the lodge was the main reason for coming into the Marine Park – and it is certainly a major highlight – but the diving was pretty good too! We did four drift dives along coral walls outside the bay, and used the current to get drawn inside onto the shallower coral flats. Huge napoleon wrasses and potato bass, schools of barracuda and even a few turtles feeding on the reef were among our sightings. The coral walls were alive with parrot fish, sea goldies and angel fish. Those in the group not keen for open-ocean, drift-diving opted to snorkel on the coral reefs inside the bay, or to do a shore entry from the beach. It was great to have the option to do the diving that made everyone feel comfortable.

It was a sad-to-leave, but satisfied group who stood in the tiny departure lounge with its dusty snack stand to bid Mafia Island a fond farewell. I think it’s safe to say that the whale shark bug has bitten and followed me home, and that we will be returning next year to stare down into the mouths of whale sharks and marvel at the coral gardens.

Will you be joining me?