Who needs a safari? Animals you can see in and around Cape Town

Cape Town has a lot of wildlife is you know where to look. While spotting the Big 5 from the back of an open-top safari vehicle may be the ultimate dream for first-time visitors to South Africa, you need not head to the bush to experience spectacular wildlife moments. Even if your holiday is limited to a week or two in Cape Town and surrounds, you could find yourself being treated to some truly memorable animal activity… if you know where to look!

Here are 5 commonly-seen creatures to spot around the peninsula and beyond:

Between June and November every year, the Western Cape’s coastline becomes a playground for these giants of the deep.

Southern Right Whales are known to migrate from their feeding grounds in the Southern Ocean to the warmer waters of the Atlantic each year. The  climate and abundance of shallow, protected bays offers the perfect mating and birthing ground. Giving keen whale watchers ample opportunity to enjoy their elegant acrobatic displays.

What makes the presence of these creatures even more amazing, is the fact that just a century ago Southern Rights were driven to the very brink of extinction by whaling ships. They were considered easy prey and the ‘right’ whale to hunt, as they are slow-moving, rich in oil and baleen (used for soap and corsets) and float when killed. It is estimated that around 20 000 Southern Right Whales were killed at the beginning of the 20th century. They’ve been protected in South African waters since 1935, but you can still see the remnants of whaling stations all along the Western Cape coastline. 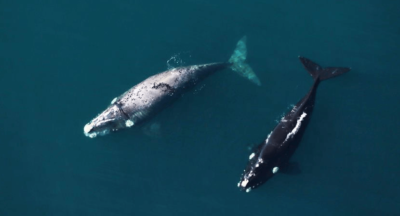 Affectionately known as Jackass Penguins due to their uncanny donkey-like bray, these tuxedoed seabirds are endemic to the south western coastline of Africa. Living in colonies made up of breeding pairs, most have settled on an array of 24 islands dotted along the coast between Namibia and Algoa Bay. There are, however, three mainland colonies – two in South Africa and one in Namibia – where visitors can enjoy a closer look at their quaint and curious antics. But more about that in a bit. 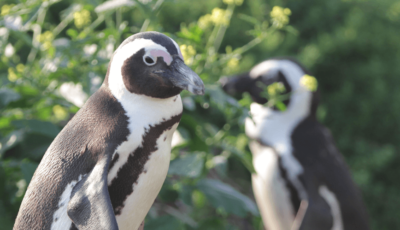 African Penguins are flightless seabirds who nest on land, but head out to the open waters to forage for food. Normally swimming within 20km off shore, they hunt for fish such as pilchards and anchovies, as well as marine invertebrates like squid and small crustaceans.

They are monogamous (aaaand altogether now: d’aaaawwwww!!), with breeding pairs returning to the same site to lay their eggs and rear their young every year. Parental duties are shared equally between males and females, with tag-team style incubation of their clutch of two precious eggs lasting about 40 days. It takes between 60 and 130 days after hatching for chicks to fledge, depending greatly on environmental factors such as food supply and weather conditions.

African penguins can live up to 27 years in the wild, but with food shortages and habitat loss very few will reach this age. Currently listed as endangered by IUCN, these adorable fellows are in big trouble and need all the help they can get! One of the ways you can play a role is by visiting one of the following spots:

Striking fear into the hearts of many, Great Whites are often considered to be cold-hearted killers that prowl the shorelines of the world for prey. However, this is a grave misconception that needs to be remedied. Apex predators, for sure, but mindless killing machines? Not by a long shot!

These magnificent ocean dwellers are the world’s largest predatory fish and can reach lengths of up to 6m. They have several rows of razor-sharp, serrated teeth and are powerful enough to launch up to 1m out of the water while breeching. Their prey mainly consists of large fish and even other sharks, with seals being a favourite, warm blooded delicacy. While there have been various incidences of fatal Great White attacks on humans, researchers believe that curiosity more than blood-lust is to blame.

Great White sharks have a known lifespan of around 30 years, but studies reveal that some may get as old as 70. While you certainly would not want to find yourself unprotected in its territory, spotting a Great White out in the open ocean is a truly exhilarating experience that would leave even the bravest heart humbled.

Also known as a rock hyrax, the most surprising thing about these cute and cuddly rodent-like creatures is that their closest living relative is, in fact, the… wait for it… ELEPHANT. 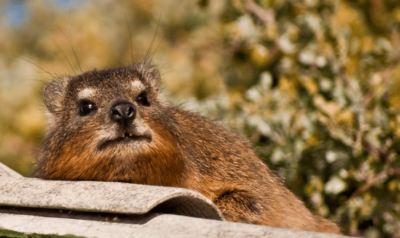 Wait what? How does that work, you may ask?….Well, when you consider its biological makeup, it shares many more traits with elephants and dugongs, than it does with rodents. Perhaps the sharp incisor-like front teeth and internal testes are the best examples of these traits.

While they may appear super cute and cuddly, they have a tendency toward aggression. Do not try to feed or touch them, because they will bite and then you will need a tetanus shot.

Best places to see them

You will find dassies in rocky outcrops all around the peninsula and beyond. They enjoy baking in the sun, but quickly retreat into crevices when feeling threatened. Lion’s Head, Table Mountain, Stony Point in Betty’s Bay, Hermanus Cliff Path, Cape Point are all good places to keep an eye out for them.

Highly intelligent, gregarious and always on the lookout for food, a number of baboon troops in Cape Town have discovered that humans are a quick and easy source of sustenance. It is not uncommon for baboons to break into houses and cars gaining for themselves an unfortunate reputation.

Despite their tendency toward mischief they are endlessly fascinating creatures that live in highly complex social structures. If you spend some time watching them (from a distance), you may notice all kinds of interactions. All while performing the important task of foraging for food.

There are currently 10 troops in and around the peninsula, comprising a total of 388 baboons. The City of Cape Town has an efficient baboon management programme in place that they run in conjunction with Cape Nature and South African National Parks (SANParks). The programme appoints baboon monitors in different areas to keep an eye on troops. They are normally armed with paintball guns, which they use to scare off the baboons if they get too close to a residential area. The loud bang is normally enough to give the primates a fright, with an actual hit being very rare.

As with Dassies, it may be tempting to approach baboons – especially the cute little ones. However, they are best left alone and admired from a distance. 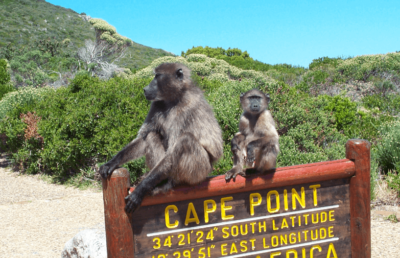 On the drive to Cape Point – you will often find a troop foraging along the road just beyond Simonstown. If you decide to stop for photographs, be sure to keep your windows closed and LOCK your doors – we told you they were clever!

In Cape Point – While they are free to wander all over the park, their favourite hangouts include Olifantsbos, Buffel’s Bay and the lighthouse area.

Once you’ve ticked off these five Capetonian creatures, you can start keeping your eye out for some of these rarely seen species: