Buffel the Elephant Seal is still resting on Fish Hoek beach. It’s the 22nd day now of Buffel’s moult and his old skin and fur are gone. A new darker skinned Buffel has been revealed (see past post).  At first the beach goers of Fish Hoek didn’t know what to make of him and flurry of people came to see him. Media was all over it and the local news headlines read “Don’t Bother Buffel (IOL.CO.ZA)” 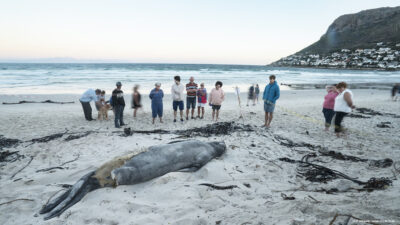 I went and printed two signs about Buffel and Elephant seals in general, laminated and pegged them to a wooden pole. I headed to the beach and placed them next to the resting seal. Some locals were placing kelp around Buffel to give an organic barrier to keep onlookers out of Buffel’s space, but this didn’t really work. Later poles were dug in the sand a loose tape barrier gave some space between all the people and Buffel. The South Easter blew and ripped most of the apart, so a tougher revised barrier was put up and continues to protect Buffel. 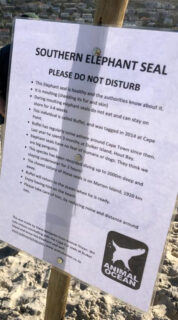 There was still the question of “Why is he here?”… Why has this Elephant seal been hanging around Cape Town and when will he leave. 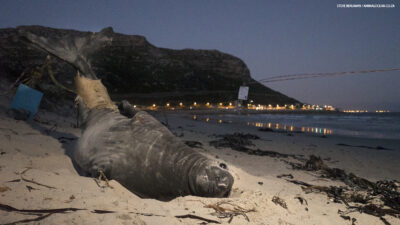 A small clue in the Buffel puzzle came from Steve Kirkman who messaged me a said “Buffel is probably not from Marion Island, he had no tag. The sealers on Marion tag all the newborn pups. He may be from one of the other Islands.” Here Steve Kirman places the tag (16577) on Buffel in 2014. 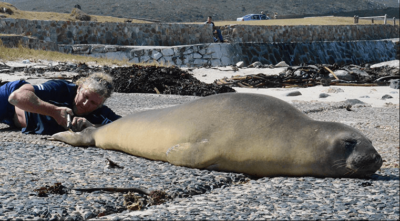 Images were sent to me from Patrick Benade, of a young Elephant seal that was actually born in Cape Point in 2012. Elephant seals perform incredibly high site fidelity, and most return to their birthplace to moult breed and rest. This could mean that Buffel isn’t lost, that he is truly Capetownian! It’s a theory and there is no hard proof, but it is a possibility.

The most regular updates on Buffel and the happenings on Fish HOek beach come from this Instagram account @Fishhoekbeach. Go follow them and see what Buffel is up to. 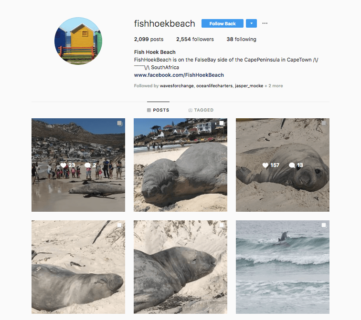